Where Can You Fly With A Basic Certificate? 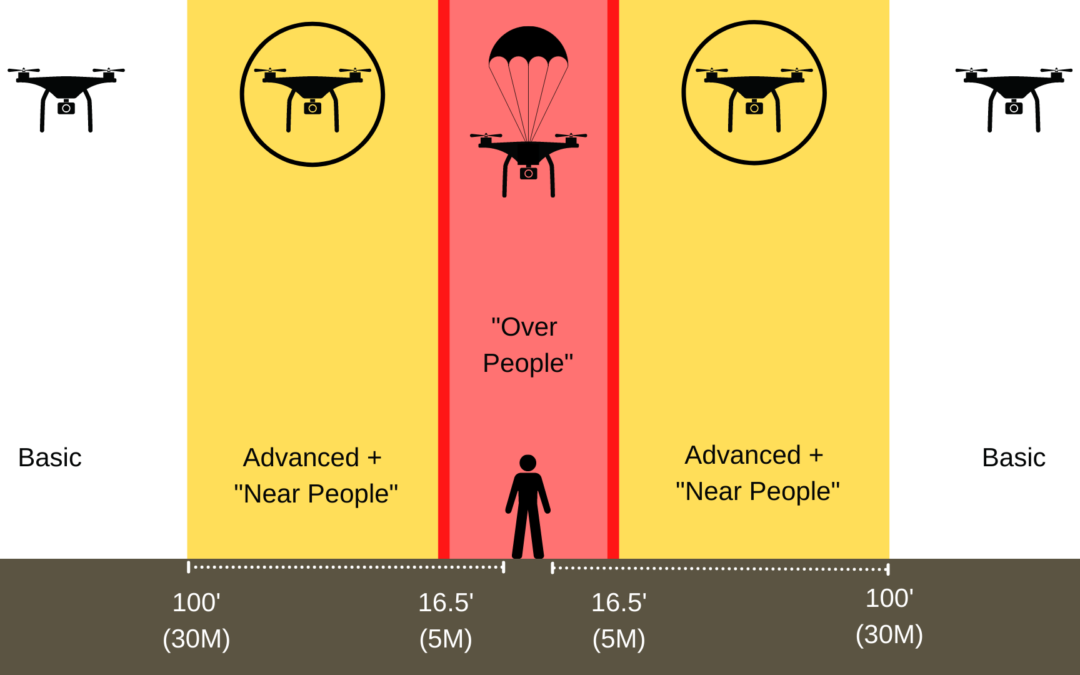 Where can you fly with a basic Drone Pilot certificate?

Understanding the Intent Behind the Regulations

When it comes down to it, ultimately Transport Canada is in the business of mitigating risk. When it comes to drones, TC essentially has several risk categories, and those categories all relate to the weight of drones as well as the proximity to people and aircraft.

Drones that weigh less than 250 grams are considered light enough that their kinetic energy doesn’t create a sufficiently high level of risk to require users to register their drones with Transport Canada.

Next up the threat level ladder are drones that weigh between 250 grams and 25 kg. These are heavy enough to warrant drone pilot training and drone registration. This weight category is further subdivided into two categories, and those are based on the proximity to people and aircraft. This is where Basic and Advanced drone certification will come into play.

Finally, the highest level on the threat level ladder is drones that weigh more than 25 kg, or drones that the pilot would like to fly outside of the normal regulations that apply to Basic and Advanced drone pilots.

“The geography of the area surrounding an airport may not respect the TC rules, and so the size of the zones surrounding airports may be less than 3 nm if, for example, there are mountains next to an airport.” 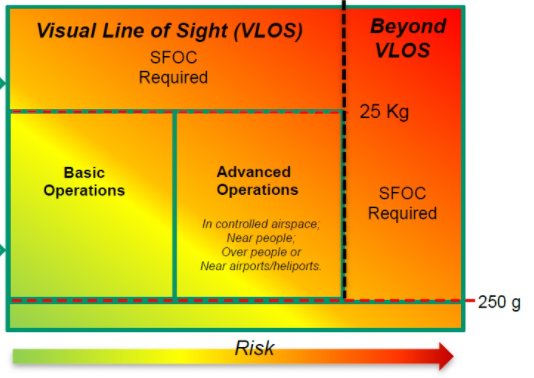 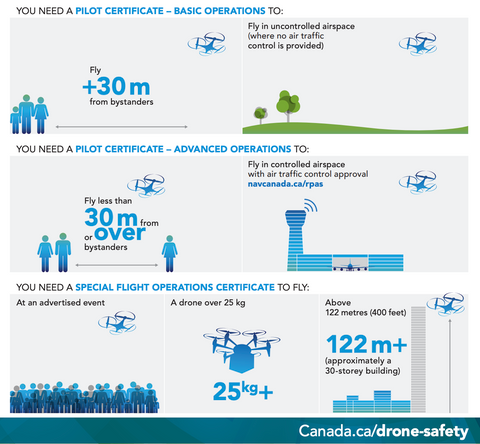 Now that you understand a little more about how and why Transport Canada uses risk levels to determine how to regulate drone pilots, let’s talk about the privileges that come with a Basic drone certificate.

With a Basic drone certificate you can:

Take a look at this screenshot of a map from the Drone Site Selection Tool and you may notice that you are not allowed to fly within about 7 nautical miles to the east of the Vancouver International Airport if you have a Basic Certificate.

The 3 nm and 1 nm rule from airports and heliports lays out the general framework, but there are instances where these rules don’t pan out in reality. The reason for this discrepancy comes down to a few factors, and those are:

The geography of the area surrounding an airport may not respect the TC rules, and so the size of the zones surrounding airports may be less than 3 nm if, for example, there are mountains next to an airport.

Nearby airports may have the effect of making one airports zone larger to accommodate the paths that piloted aircraft require to safely navigate in and out of airports.

Airport utilization generally creates much larger zones where Basic drone pilots are not allowed to fly because these airports often accommodate larger aircraft, or sometimes just more aircraft, and therefore the airports need to designate more airspace for piloted aircraft to be able to maneuver.

If the rules don’t match the reality, then how, you may ask, are you supposed to know where you can and can’t fly with a Basic certificate? 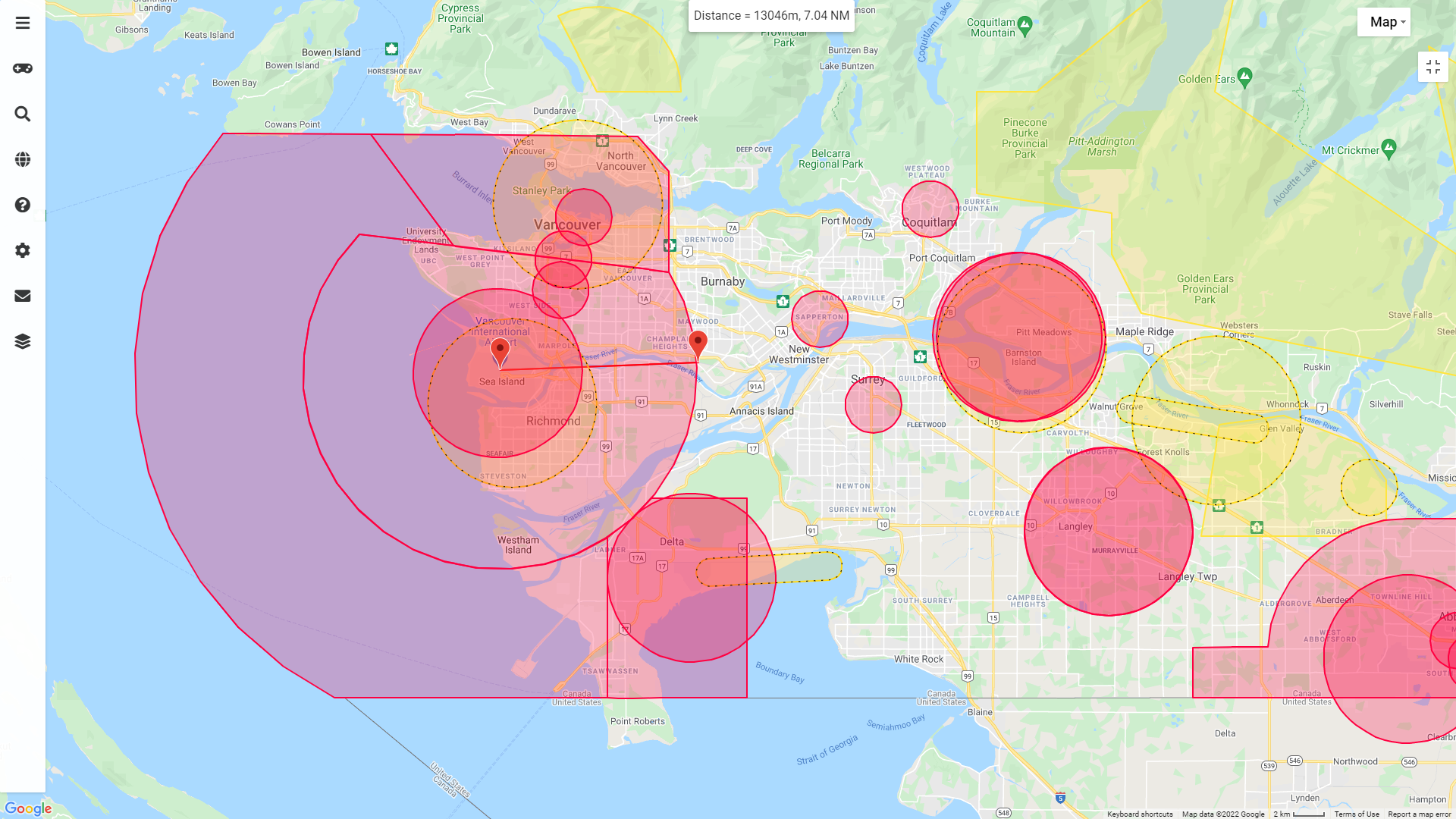 The National Research Council has created a Tool that answers the question of where you are allowed to fly with a Basic drone certificate. 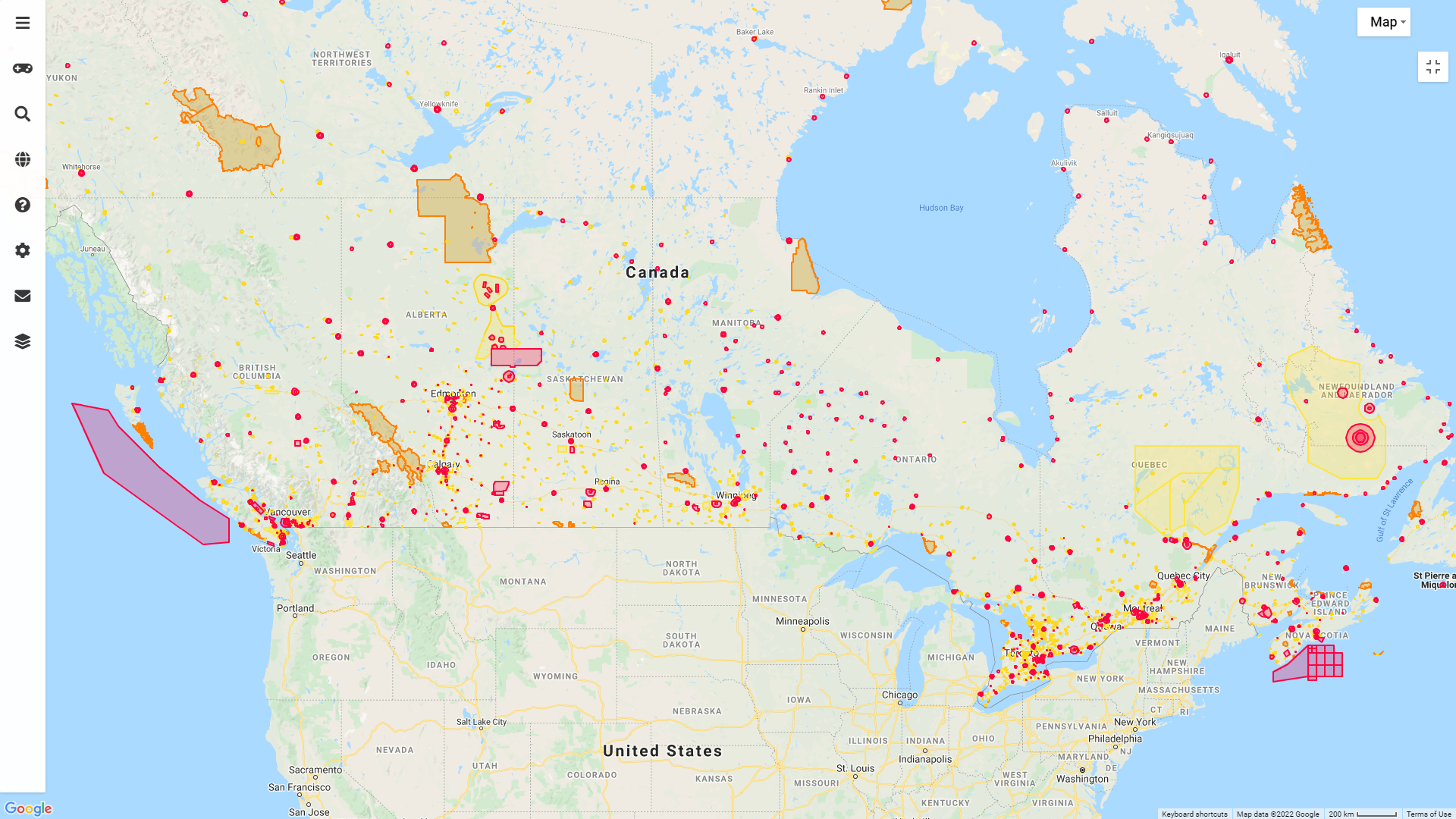 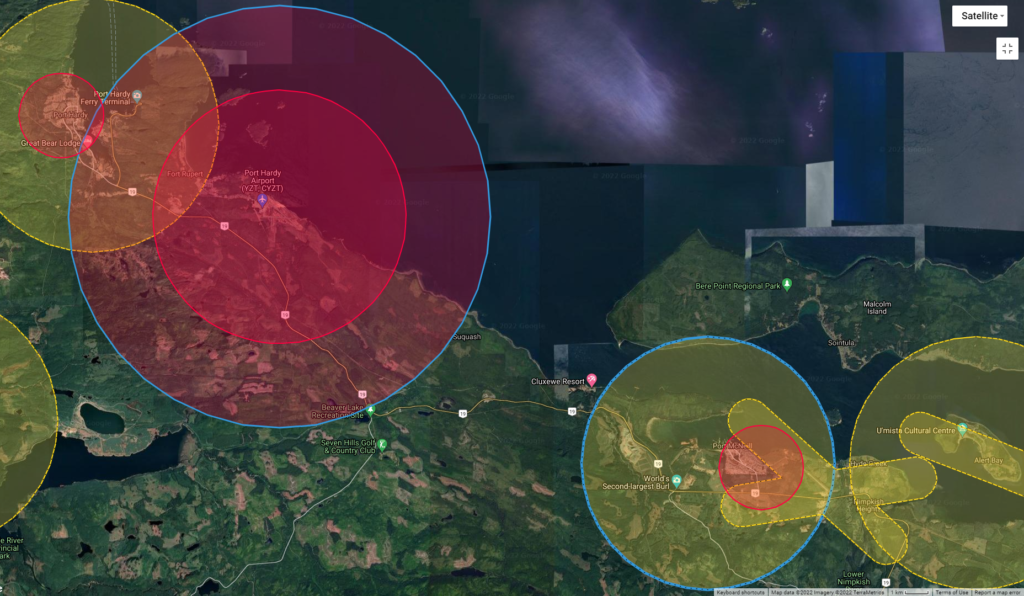 You can see that the entire area over the town of Port Hardy and Port McNeil, drone pilots with a Basic certificate are not permitted to fly with a small RPAS

Vancouver and the Lower Mainland 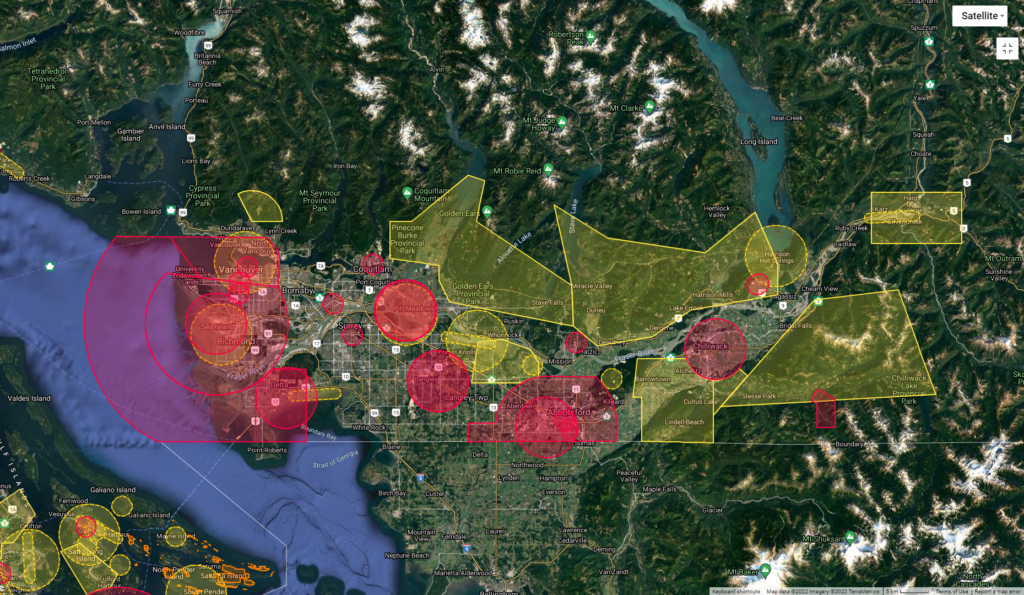 Once again, note that in the areas where the vast majority of people live in Vancouver and the Lower Mainland, a Basic certificate will not allow you to fly your small RPAS. 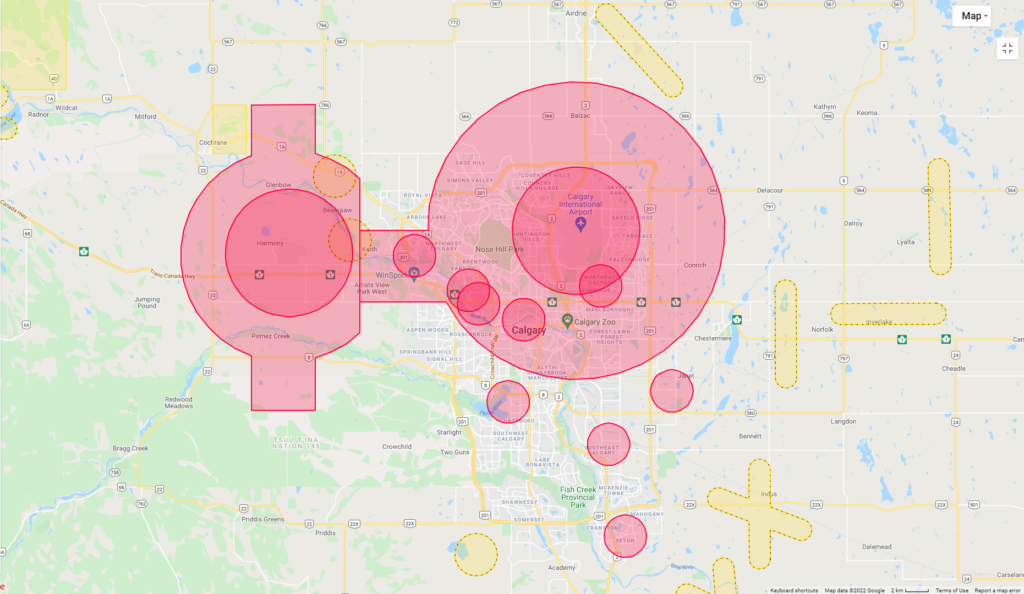 The story is the same in Calgary. Shooting from the hip, it looks like approximately 80% of the city and surrounding suburbs do not allow drone pilots to fly with only a Basic certificate.  You’re going to have to drive well out of town before you can get in the air legally.  Pretty difficult to do downtown Calgary drone real-estate from Bragg Creek. 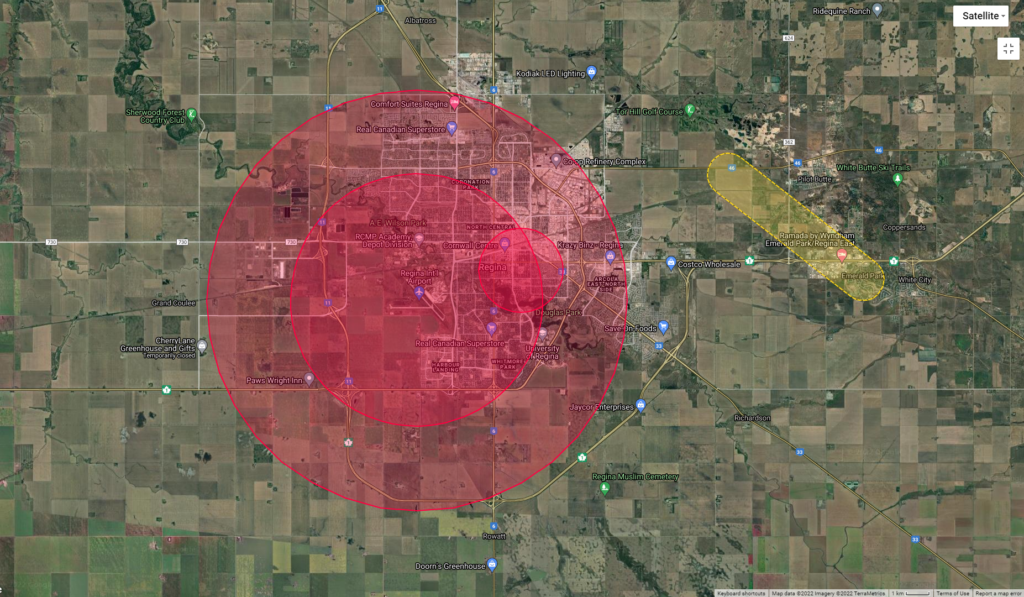 Same as Calgary!  Well, at least you can fly in Richardson. 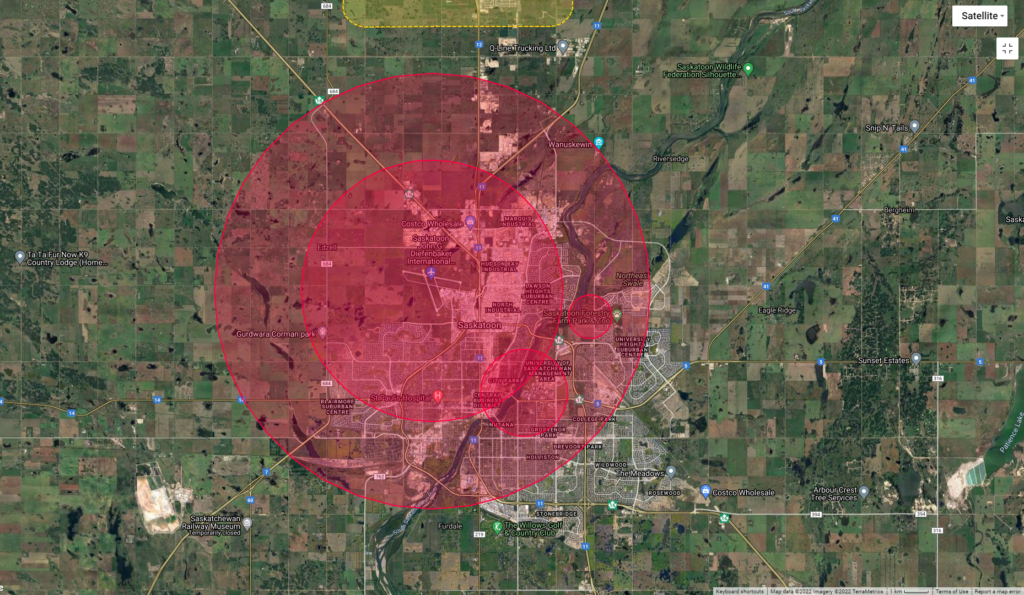 Same here.  Notice how the Costco in both Saskatoon and Regina is outside the red zone at least? 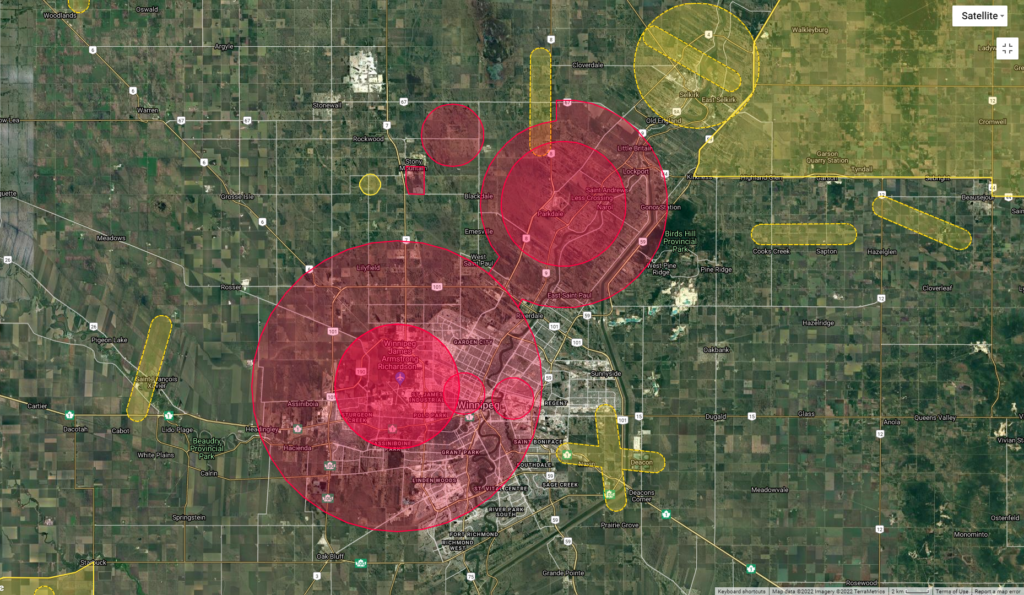 So much red.  Have you read the story about the Gimli Glider?  Yeah, you can’t fly there either. 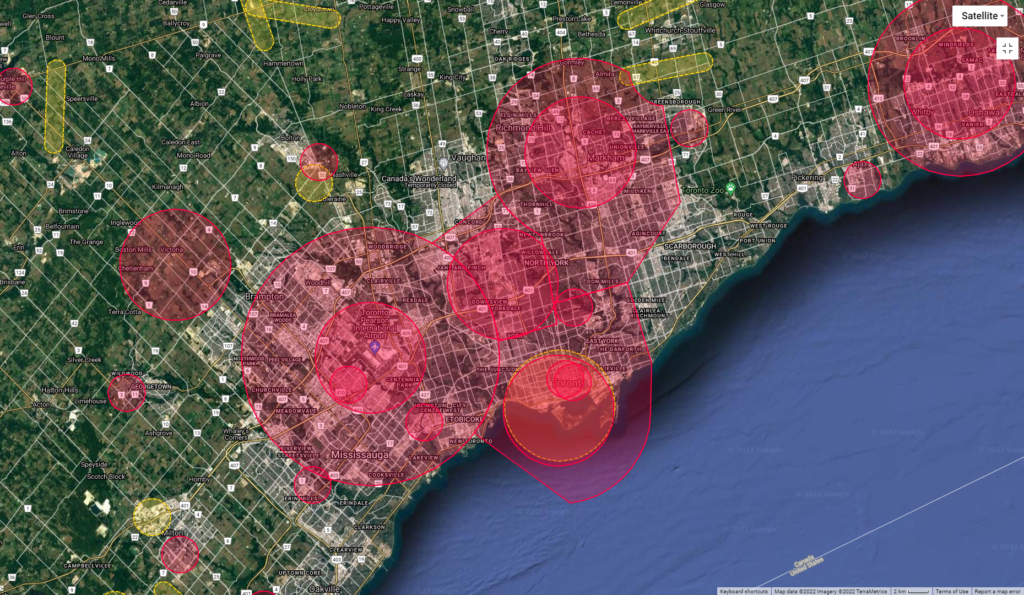 Yeeeeeeah no.  Definitely not the CN tower.  You’re going to Scarborough or Pickering to get outside of the zone. 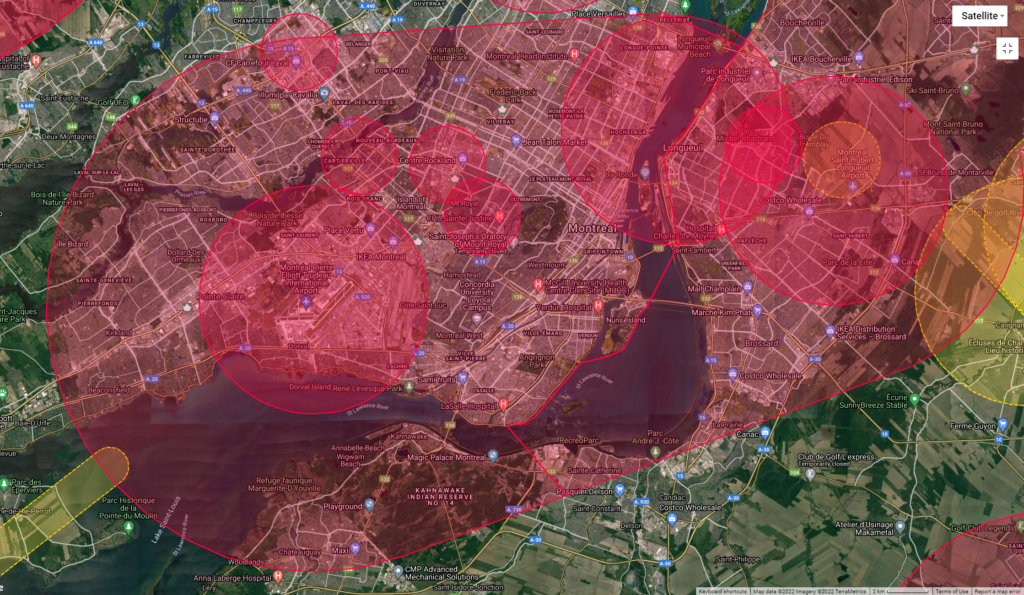 It’s important to remember that all of the examples that we have gone through are ONLY addressing the rules regarding flying close to piloted aircraft. This is because the map only shows areas where you are prohibited from flying because airports are nearby.

Recall though, that with a basic certificate you also need to make sure that your drone doesn’t come within 30 meters (about 100 feet) horizontally of bystanders. In essence, this means that there is a 200 foot diameter cylinder centered on every bystander in the country, where you are not allowed to fly with a Basic certificate.

Once you take the “proximity to people” component of this equation into account, it should become clear that for the vast majority of people in Canada, a Basic certificate will not be adequate to allow you to fly your small RPAS in populated areas. 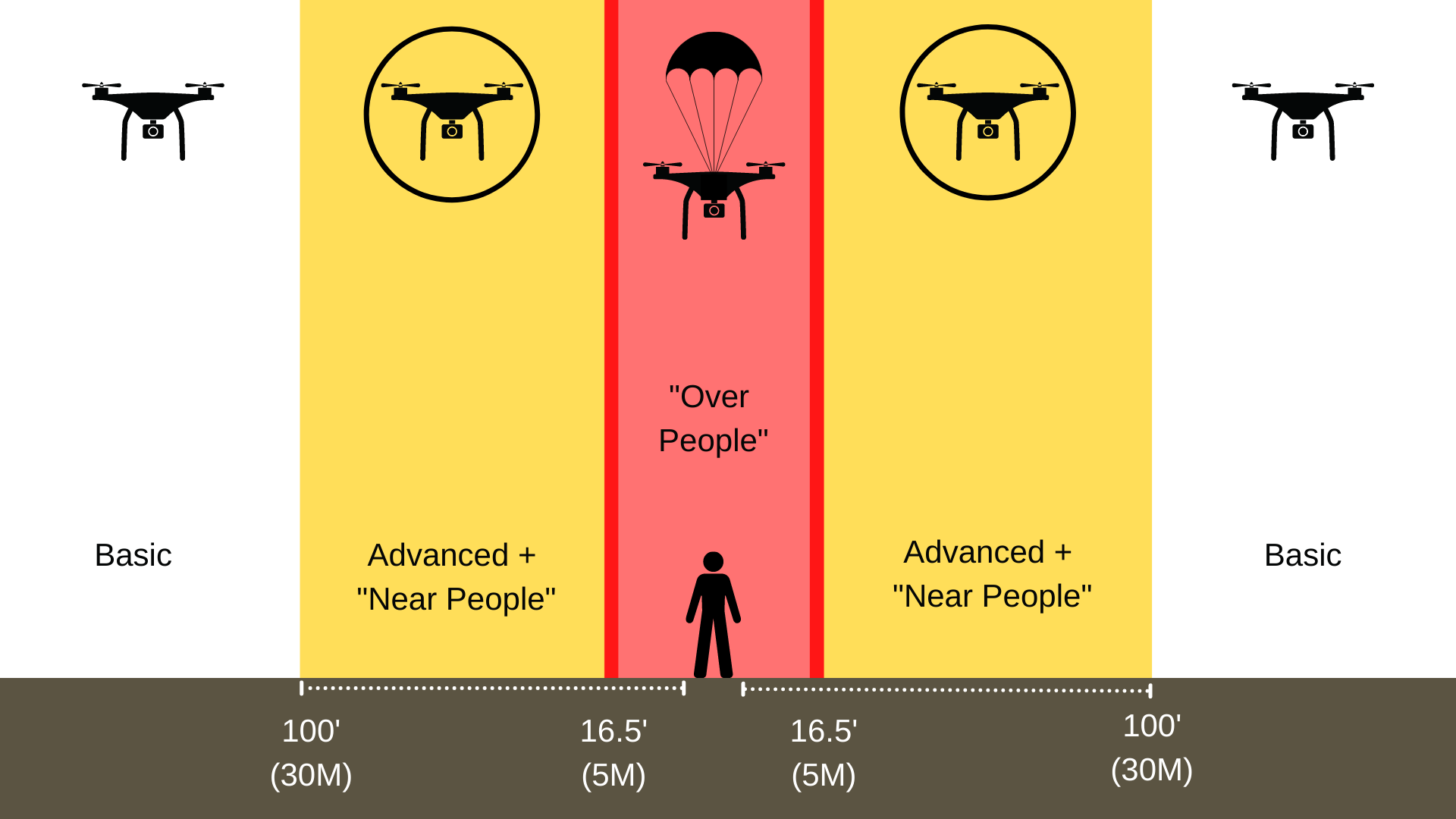 To wrap this all up in a bow, we have reviewed how to find and use the Drone Site Selection Tool and we’ve also gone over how keeping away from airports and heliports isn’t sufficient to ensure that you are flying legally with a Basic drone certificate.

Always make sure that you maintain the appropriate distance between your drone and bystanders! If you’d like to unlock your permission achievement, then we suggest you take a look at our Advanced certificate training course so that you can fly closer to airports and bystanders. Take care and fly safe! 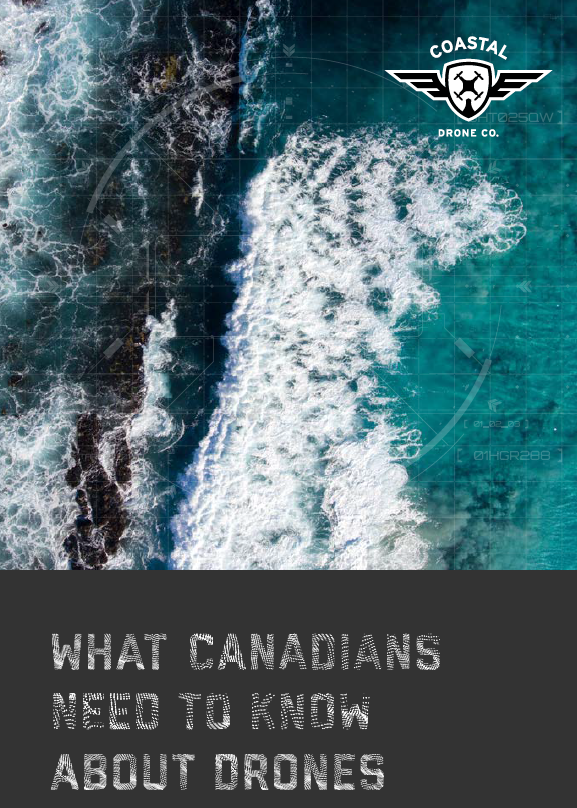 Learn what it takes to get a drone pilot certificate!  Also included is some great information about where the drone industry is going.